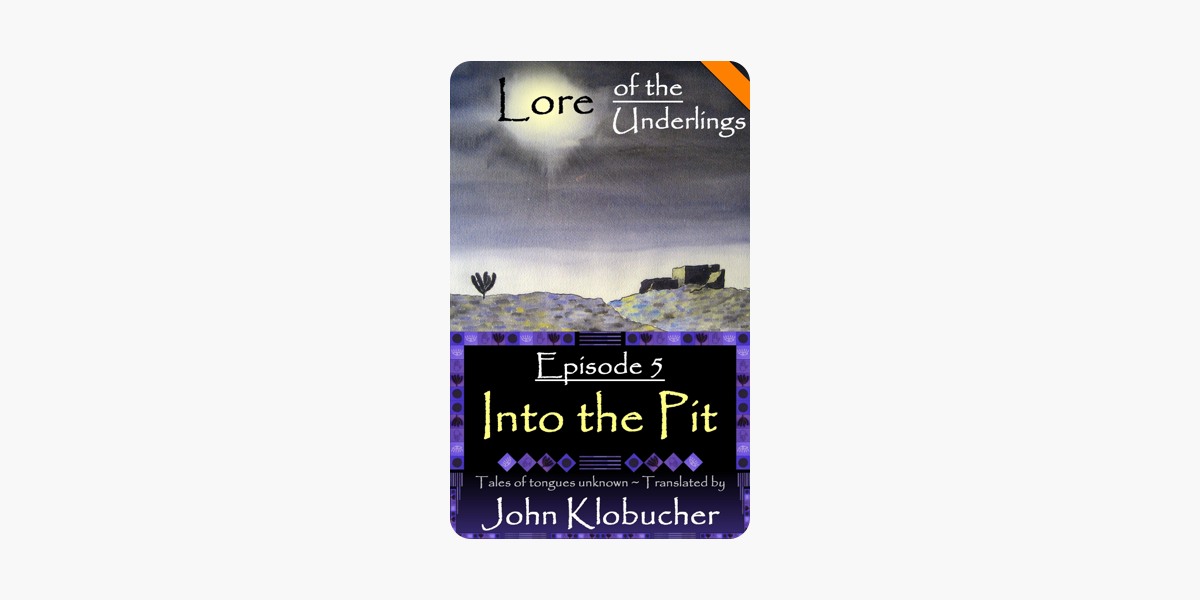 And then the black Guard himself makes the scene with an even more devilish scheme Lore of the Underlings is an epic poetry series from John Klobucher's lands of Lore. It's a bittersweet saga of gold and shadow told in classic style -- with old-world words but new-world wit. Fun for fans of puns and lyrical tongues! Download: epub mobi Kindle pdf more Online Reader lrf pdb txt.

PDF Lore of the Underlings: Episode 5 ~ Into the Pit

Diane S. Comic twists - There's a lot of action in this fun little episode, almost to the point of slapstick. The three heroes John Cap, Morio, and Vaam end up in a perilous situation, but there are comic twists at every turn to keep you guessing - and laughing! I really love where this series is going. Jones reviewed on on Sep. This is a snappy little episode. Very fresh and mysterious at the same time.

Is never aught right to your mind? All is still downright bad, I find. A Youtube series created by Bruva Alfabusa, the show follows the exploits of Emprah himself in his quest to bring the Imperium of Man to its former glory, helped by the Captain-General of the Adeptus Custodes nicknamed "Little Kitten" by his disrespectful underlings , Magnus the Red now both ensouled and forgiven , and a hilarious cast of other major 40k characters.

The series has become a huge success mostly by poking fun at many of the memes, traditions, and quirks of the 40k universe and the fandom, but also by some very awesome scenes, and, of course, great music. This shit has become so popular that it has its own fanfiction one of which ended up gaining multiple meta-Fanfictions of its own Does that make them a fanfic Most fans agree that, while a wild and very unserious take on the 40k universe, and the episodes are often littered with injokes to the point of one regarding Magnus's VA taking up an entire special , the plot itself isn't actually that outlandish.

If the Emps would wake up, it's pretty much a given that he would remove the worst parts of the Inquisition in short order, as well as enacting extensive reforms throughout the rest of the Imperial bureaucracy, while probably being an ass, as he always was. The unsure part is if the Emps would have learned from his 10, years of mistakes, which the series believes he has, deep inside.

Doesn't help his temper though. The series began back during the unending plot stagnation that has happened since third edition, though now that the plot's actually begun to move forward for a change, it is unknown how this will affect the series. Starting off with a few characters, the series has evolved to encompass a fuckton of major and minor characters, with their own small arcs and all.

‎Lore of the Underlings: Episode 5 ~ Into the Pit en Apple Books

It's not quite OotS level, but it's getting there. Very obnoxious and accompanied by the Ultramarine Chant from Chaos Gate. They apparently cannot be defeated due to their literal use of the "holy Codex" from their "Spiritual Liege. While the Emperor is not amused with them at all, he tolerates their OP plot armor to do impossible tasks for him such as retrieving Magnus from the Eye of Terror with their Gellar Field turned off , of all things with minimal casualties, finding and sneaking the rest of Vulkan's artifacts onto Nocturne, and currently outdancing the best Harlequin dancers in the Webway while searching for Jaghatai Khan.

Other impossible tasks in the past include using a giant Necron Pylon as a melee weapon and outfighting a Transcendent C'tan shard. The Salamanders are a bunch of pyromaniacs in Cataphractii Terminator armor, infamous for their obsession with fire.


They appear to be severely deaf, and are at least prone to talking in very loud voices, not hearing Kitten freak out next to them or the Ultramarines sneak the artifacts past them while their infamous theme song was blaring, and later not hearing a trapped Corax called out for help. They also seem to be oblivious to their Primarch's perpetual abilities, given that they're utterly shocked whenever Vulkan dies and resurrects again, despite personally witnessing it happen 5 times already, so far.


The Emperor wonders if the Salamanders' pyromania had to do with his act of keeping their gene-seeds closer to the candle for warmth when he was creating them. The Inner Circle are a ragingly paranoid group of neurotic basketcases, far more so than in canon. Keep having to make non-circle marines "repent" for overhearing them discussing the Fallen very loudly.

They enjoy listening to Linkin Loyalists Purge in their drop pods and ramming swords through Xenos skulls.